The Pomedes hut on the Tofane

It all started back in 1954, when the municipality of Cortina, in anticipation of the 1956 Olympics, published an invitation to tender for the construction and management of a small mountain hut / refuge, projected for the Pomedes area above the chairlift that would bring athletes to the start of the men’s downhill race. Of the two proposals received, the winning bid was that of alpine guide, ski teacher and founder of the prestigious amateur climbing group, Scoiattoli, Luigi Ghedina, or Bibi as he was affectionately called.
In 1955, he began the construction of Capanna Pomedes, together with his wife Lucilla Gilmozzi, from Tesero in the Trentino region. She had worked in Cortina for several years and thus knew the ins and outs of the hospitality trade. The hut originally consisted of a small bar, a dining room and some rooms to accommodate mountaineers.
The couple, already proud parents of two daughters, Adriana and Caterina, lovingly managed the hut, while continuously improving it in order to satisfy demand due to a constant growth in tourism. In 1957, the first via-ferrata in Cortina was born, on the Tofana di Mezzo, and its starting point was right above Bibi’s hut. The route, which he himself had studied and tested, brought mountaineers first to Punta Anna and then to the summit of Tofana di Mezzo. This invention put Cortina and Pomedes firnly in the spotlight, bringing even more people to the area, which consequently led to further development of the hut.
In 1966, Bibi decided to improve the route of the via-ferrata for safety reason. Subsequent modifications over the following years culminated in 1972, with the completion of the route as we know it today. Spectacular and exposed on the ridge of the Punta Anna, it is classified as one of the most challenging via-ferrata itineraries in the Dolomites.
Today the hut is managed by Bibi’s youngest children, Ruggero and Renata, who seek to renew their hut and pamper their guests with the same passion as their parents before them. 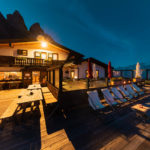 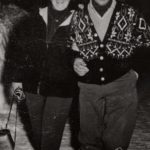 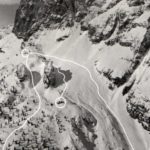 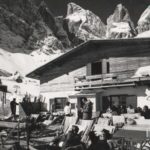 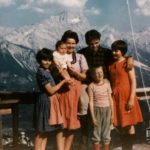 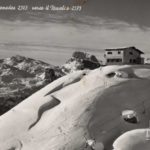 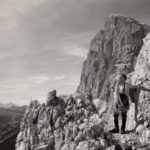